Profitable business in Bulgaria for Russians in 2019 (PART I)

Bulgaria has always been attractive to Russian business. Еven if it is not the richest country in the EU. Neither is the most orderly. Bulgaria is not the most democratic also. Outside the top 100 countries in the world is by criterion: Freedom of speech in the media.

However, more and more foreigners – Russians, Chinese, Germans, Italians, Americans – start their own companies or buy ready-made companies and start a business in Bulgaria. The Question is: why? If you read this article you will understand why they do it. And what are the advantages of doing business in this beautiful East European country.

The advantages of business in Bulgaria

The countries of Central and Eastern Europe are largely mentally close to the Russians. It affects a long stay in the socialist community, and sometimes centuries-old historical traditions. Bulgaria in this sense can serve as one of the clearest examples. The similarity of languages, writing and culture creates comfortable conditions for the Slavs.

At the same time, EU membership gives Bulgarian citizens the right to freely move their goods and services within Europe. And, of course, go by yourself anywhere without a visa to the EU. Access to profitable loans from European banks. Moreover, if you have a Bulgarian passport, you can travel without a visa to 168 countries all over the world.

To find a place in the business world of countries such as Germany, France or Italy, you need a solid initial capital. In Bulgaria, without money, too, will not be easy. However, the order of the amounts is different, more modest. There are other important benefits:

What business can the Russians do in Bulgaria?

A person who has not found an effective way to earn money in his homeland will not be easier in a foreign land. How much they were close as mentalities, Bulgarians and Russians, there is a difference between them.

There is nothing surprising in the fact that local businessmen are engaged in the most profitable sectors. Visitors get directions that citizens of the country for some reason cannot or do not want to do. Unique offers work best. The second option is to serve the same foreigners as the entrepreneurs themselves.

There are only two main areas of activity of Russian entrepreneurs operating in Bulgaria:

Both options have advantages and disadvantages. It is advisable to offer Bulgarian consumers goods and services that are few or not in the national market. To enter into open competition with local businessmen “on their field” is not the best idea, but often obviously losing. It is advisable to open enterprises of the following profiles:

Ideas and market niches for small businesses in Bulgaria

However, whatever you decide to do,  you will need help on the ground. Look for a Bulgarian consulting firm that provides corporate and accounting services. Such a company is VD&A. They are proven professionals in this field. They will help you with registering your business(company formation). By opening your bank accounts. As well as keeping your new firm’s accounts. 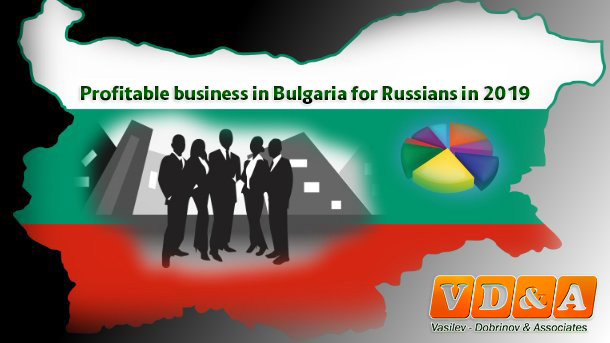 2019-07-23
Previous Post: Rise of Foreign Investment in Bulgaria
Next Post: Profitable business in Bulgaria for Russians in 2019 (PART II)